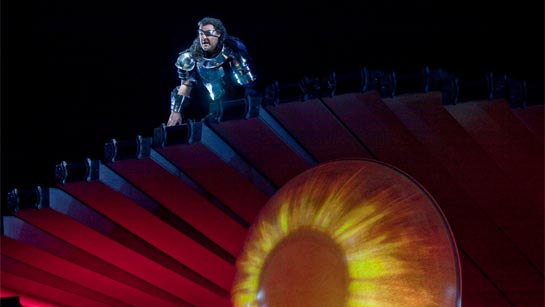 Cast (in order of appearance)

Based on last autumn’s HD broadcast of Das Rheingold and a live performance of Die Walküre seen on April 28, the Metropolitan Opera’s new Ring cycle is a costly miscalculation.

Director Robert Lepage and his production team have created a high-tech unit set that consists of 24 moveable plans and is dubbed the “Machine”. Combined with a price tag estimated as high as $40 million, and its various staging mishaps, this Ring is turning into the operatic equivalent of the Broadway show, Spiderman: Turn off the Dark.

When the visually irritating contraption rearranges itself, the Machine’s squeaks and groans detract from Wagner’s music and the staging is otherwise static and boring. And not all of the Die Walküre cast are suited for their roles.

When the opera premiered on April 22, soprano Deborah Voigt, Brünnhilde, fell as she clambered up the Machine’s treacherous slope. And during the Act III Walkürenritt at the April 28 performance as mezzo-soprano Eve Gigliotti, Siegrune, slid down a plank-cum-horse’s neck she fell onto the main stage floor, three feet below where she was supposed to land. According to the Met’s press office this mishap occurred because of a misheard cue.

One of Gigliotti’s colleagues assisted her and as the other Valkyries continued to sing Gigliotti ran into the wings. She gamely returned a few minutes later to audience applause and continued performing.

The audience also applauded the opening of Act III, when the Valkyries sit astride the Machine’s planks and appear to be riding horses. However, puppet horses used in the play War Horse at Lincoln Center’s nearby Vivian Beaumont Theater are more theatrically imaginative, and realistic, steeds than the Machine’s planks. 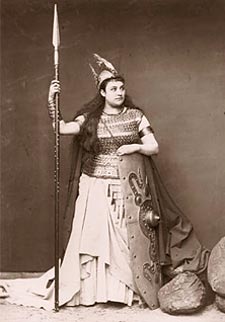 Given the moving machinery, the long skirts the Valkyries wear is another potential hazard. Designed by François St-Aubin, this garb is reminiscent of the costume worn by Amalie Materna when she performed Brünnhilde in Bayreuth in 1876.

Too often this production of Walküre lumbers from scene to scene, the Machine starts twisting and turning and the next part of the opera unfolds. The work’s dramatic arc is diffused so instead of being caught up in the opera’s taut familial conflicts, we witness a series of disparate scenes ruled by the Machine.

Hunding’s spacious hut is too wide to provide any sense of claustrophobia and performing much of Act I below the apron mitigated the tension that should develop between Siegmund, Sieglinde and Hunding. The distracting snowstorm projected onto the backdrop during part of Act I was another example of the production team’s preoccupation with technical gimmickry. (The snow must have melted quickly because spring unfolds by the end of the act.)

Today’s Ring directors can benefit from studying Patrice Chéreau's engrossing direction of the Bayreuth centenary production. Certainly Brünnhilde’s anointing of Siegmund in Chéreau's staging of the “Todesverkündigung” scene was one of the highlights of the live performance and the videotaped version of Die Walküre and should also be one of the most gripping moments in of any staging of the Die Walküre.

In Lepage’s version, the Machine stands upright, lit by projections to resemble tree trunks in a forest. Brünnhilde walks onto the stage and she and Siegmund, Jonas Kaufmann, sing their music.  But the static, overly bright lighting and hackneyed stage movements dilute the scene’s mystical aura.

König, who was so effective as Gurnemanz in the Grand Teatre del Liceu’s Parsifal two months ago, has the blackness of tone if not the menacing stage presence needed for Hunding. König’s costume makes him appear more like Falstaff than one of Wagner’s vengeful warriors.  Still, it was a pleasure to hear this singer again so soon after his Parsifal appearances. 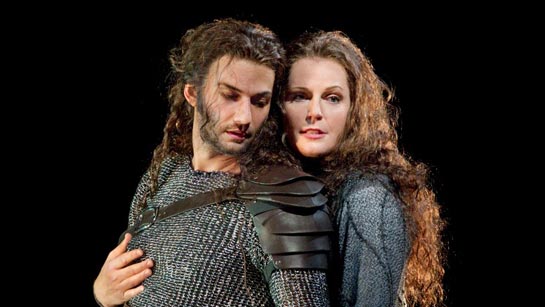 Even though soprano Eva-Maria Westbroek’s voice sounds a couple of sizes too small for the Met’s cavernous auditorium, she and tenor Kaufmann are physically appealing twins. Westbroek seemed to have recovered from the indisposition that caused her to cancel her appearance in the last two acts during the premiere. But on April 28, the conclusion of Sieglinde’s “O, Herstes Wunder!” was more cloudy than radiant.

Kaufmann’s is making his debut as Siegmund in this production and he is of course a charismatic actor.  Still, his lyric tenor is better suited for lighter Wagner repertory, not heldentenor roles. While his “Wälse! Wälse!” rang out forcefully during Act I, Kaufmann displayed a bit of a wobble.

Bass-baritone Terfel lacks the gravitas needed for an authoritative Wotan.  Still, he sang more eloquently and passionately than last autumn, when he portrayed the Das Rheingold Wotan.

Voigt is an engaging actress and her voice still has a girlish timbre. But she is not a hochdramatischesopran and for much of the opera her singing was more a sketch than a fully realized portrayal. Her effortful performance was akin to those heard in smaller opera houses and one wonders how Voigt will manage the vocal challenges that await her next season in Siegfried and Götterdämmerung at the Met.

In 1984, I witnessed James Levine’s conducting of his very first Ring performances when he led Die Walküre with the Met on tour in Washington, DC. Those two stirring performances were a harbinger of Levine’s work in the Met’s then-planned new Ring cycle. Lately, Levine’s Wagner conducting has become erratic, so credit is due to the Met’s orchestra for playing so splendidly. And credit also the spirited, unflappable singers who portrayed the Valkyries.

The April 28 performance was the company’s 525th performance of Die Walküre. After the new Lepage productions of Siegfried and Götterdämmerung are unveiled the Met presents three complete Ring cycles during spring 2012.