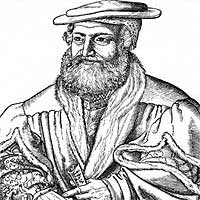 The first performance of Die Meistersinger von Nürnberg (The Mastersingers of Nuremberg) was on 21 June 1868. It is Wagner's only mature comedy, set in Nürnberg in the 16th century.

The master singers (Meistersinger) were a guild of singers, consisting of amateur poets and musicians, often master craftsmen in their main professions.

“In my view, to misuse Die Meistersinger as a prop for complacent, arrogant nationalism is to betray the grossest ignorance of its true nature. One would have to be deaf, blind, and utterly unperceptive to take this sublime depiction of human gaiety, with its utopian potential, and read a pogrom or a Party rally into it. Any attempt to force the work into an ideological mould is bound to be a distortion.”
(Wolfgang Wagner in his autobiography Acts)

The titles of Richard Wagner's operas in different languages