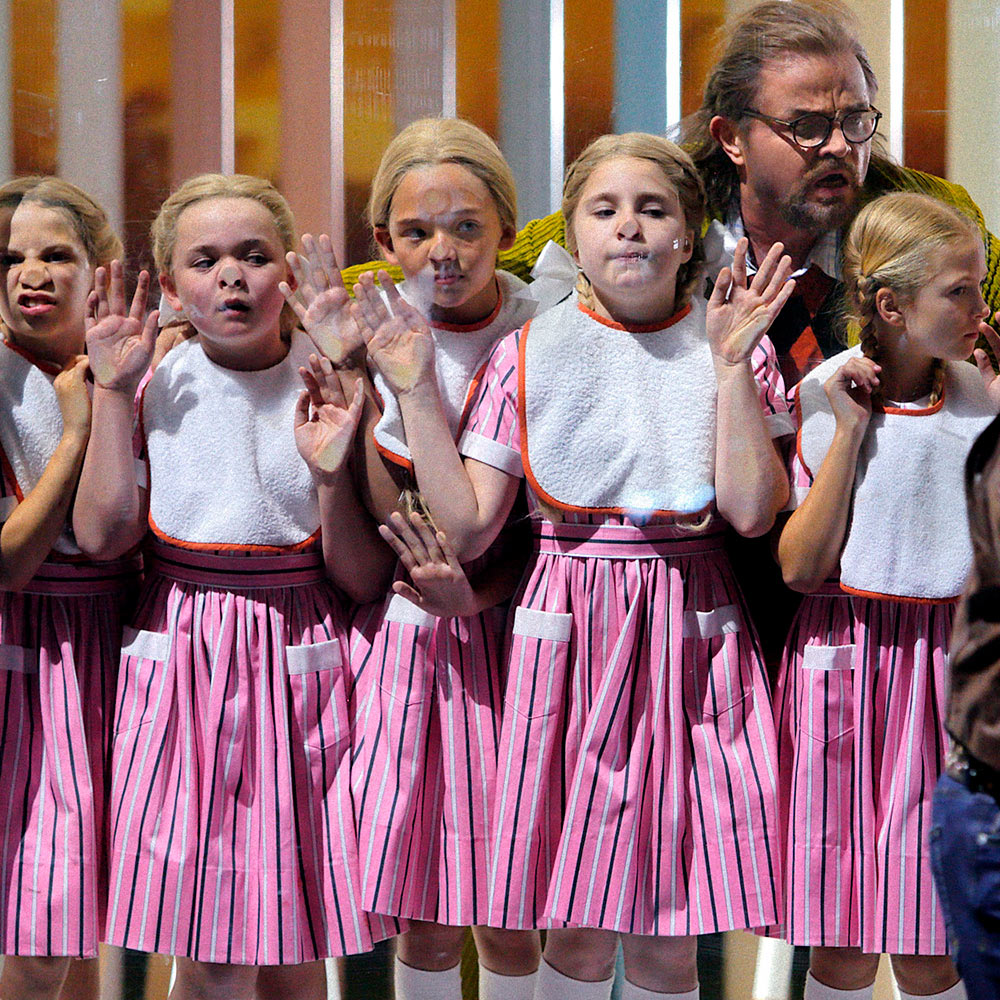 Arnold Bezuyen (Mime) with young girls. “There are intriguing elements, for instance the ongoing element of the children ‘leaders’ educating and abusing other children, struggle and oppression already echoing down the ages.” (Photo: Enrico Nawrath, Bayreuter Festspiele)

So begins the Wanderer’s answer to the first of Mime’s three riddles, in which notoriously the dwarf asks his unwelcome visitor questions he hopes will catch him out—they do not—thereby wasting the opportunity to ask the chief of the gods what he, Mime, actually needs to know. Mime has asked which Geschlecht may be found in the earth’s depths. Wotan/the Wanderer tells him: the Nibelungs, that is Mime’s own kin. In response to the third riddle, when Mime asks him which Geschlecht lives in the cloud-hidden heights, the Wanderer, disguised chief of the gods, tells his interlocutor that it is those very gods, continuing, ‘Lichtalben sind sie; Licht-Alberich, Wotan, waltet der Schar.’

If I understand correctly—I should stress that I am writing this immediately after Das Rheingold, with much yet to be revealed—those points in that exchange point to something crucial in understanding Valentin Schwarz’s new Bayreuth production of Wagner’s Ring. That dialectical opposition between Wotan and Alberich, ‘white’ and ‘black’ Alberich—which is certainly the meat of the Rheingold drama, and in many ways underpins all that is to come—is taken a little more literally, rendering them twins. The Rheingold prologue is perhaps as close as we shall come to a musical presentation of the ‘spontaneous generation’ Wagner’s contemporary Karl Marx hymned in his long unpublished, Feuerbachian Paris Manuscripts:‘Generatio æquivoca is the only practical refutation’ of the theological ‘theory of creation,’ The ‘abstraction’ of the old way of thinking of oneself as apart from Nature overcome, ‘for you too are Nature and man’.  (Wagner would have read Arthur Schopenhauer’s description ‘spontaneity of the world of Nature’ in Parerga and Paralipomena when working on the score, but the roots of this idea unquestionably extend back to the Young Hegelian inheritance he and Marx—‘black’ and ‘white’ Marx?—found in Ludwig Feuerbach and other writers of the 1840s.)

Luis August Krawen’s opening video projection makes it very clear that we were in the waters (‘in the river Rhine’, as Anna Russell would have reminded us, ‘in it!’) so as to fit any number of creation or non-creation myths. What proceeds differently here is the vision of twin umbilical chords, leading us to twin babies—who, as the saga develops, we associate with Wotan and Alberich. At any rate, there are birth, kinship, and rivalry: a reminder that Mime’s ‘Geschlecht’, often translated as ‘race’, has here more to do with genealogy, with family, house, and lineage. Schwarz not only takes Wagner’s three lineages—dwarves, giants, and gods—as the basis of the drama to come, but takes Wagner further than himself by rendering at least two of them estranged branches of the same clan: Cain and Abel, Esau and Isaac, Wotan and Alberich…

Struggle between Black and White Alberich

Inheritance, therefore, is fundamental. In an underlining of the family saga element (which, at one level, surely no one could deny) Schwarz has Alberich steal and turn a child from the swimming pool over which the Rhinemaidens (glorified au pairs?) watch over a group of children. Notably, that child is black-haired, as opposed to the blond of the others. One can go down the route of trying to work out precisely what the ‘dark’ child symbolises: the gold, what it is turned into, inheritance? I am not sure that is really the way to go, though. There is a struggle between Black and White Alberich both for that boy and, intermittently, for a blonde girl, which perhaps represents—if at times, a little confusingly—the overall power struggle. Alberich is certainly an outsider and remains so, presumably at some stage cast out. Wotan’s crew is the ‘legitimate’ branch, with a ghastly family (shades of Murdoch, or even Dynasty?) in competition over the spoils and succession. I worry somewhat that the ‘racial’ element of Geschlecht may come to be seen as the point, rather than a metaphor, but perhaps the claim—it certainly has been claimed, if far from convincingly—is that race is the point here. As with much else, we shall see. 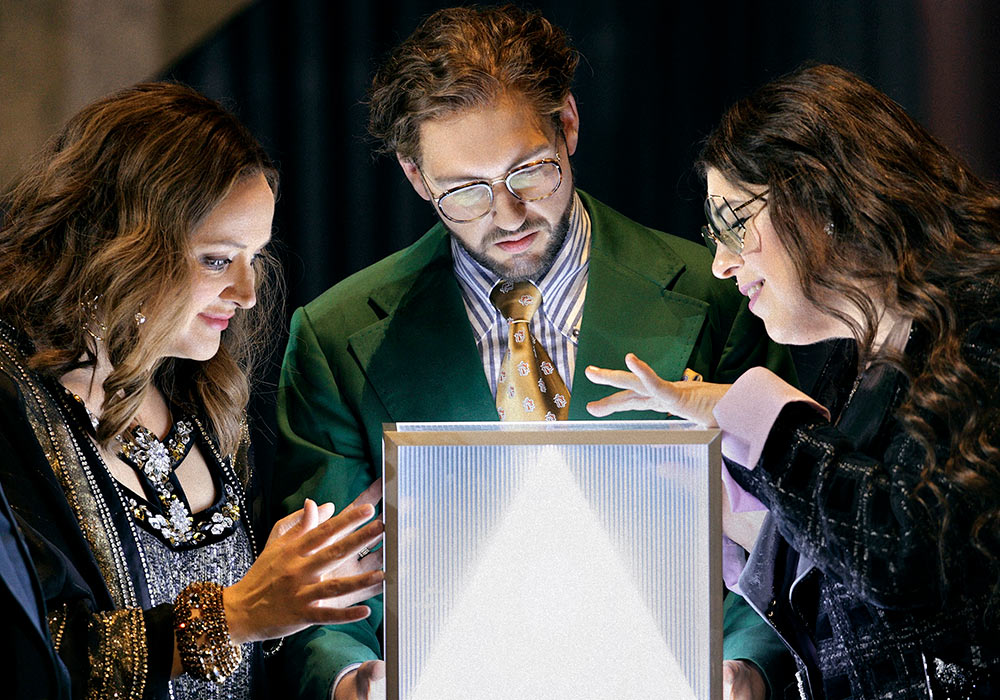 There are intriguing elements, for instance the ongoing element of the children ‘leaders’ educating and abusing other children, struggle and oppression already echoing down the ages. Wotan’s ecstasy in his own apparent victory at the close is compelling: high, it would seem, on his own ideology, or at least his own misdeeds. There are others I have yet to understand: why does Erda put in several appearances before her scheduled arrival, just to watch, and why does she walk off with the blonde girl in her care at the end? Is this in some sense a presentiment of Brünnhilde, as the boy might be of Hagen? Again, we shall see. It would be odd to understand everything, or even have much of a developed idea about at this stage. This, after all, is only the Vorabend, the preliminary evening. Something more strongly political might not be a bad thing, but one might argue much attention, from Patrice Chéreau onwards, has been devoted to that already; perhaps it is time for a shift of emphasis. Again, we shall see.

Cornelius Meister and the orchestra

Conducting anything at all at Bayreuth is a difficult task indeed, even when familiar with the set-up, let alone when not—likewise even when it is a single evening’s work, rather than that of four. Cornelius Meister, who was due to conduct Tristan but now substitutes for Pietari Inkinen, made a better job of Das Rheingold than I have previously heard here (Sinopoli, Petrenko, Janowski). Balance was excellent; so too was pacing. If there were a few orchestral fluffs—a couple of brass wrong entries, for instance—nothing was too grievous. The orchestra itself likewise sounded on good form. In both cases, more will surely come, but this was an impressive start. 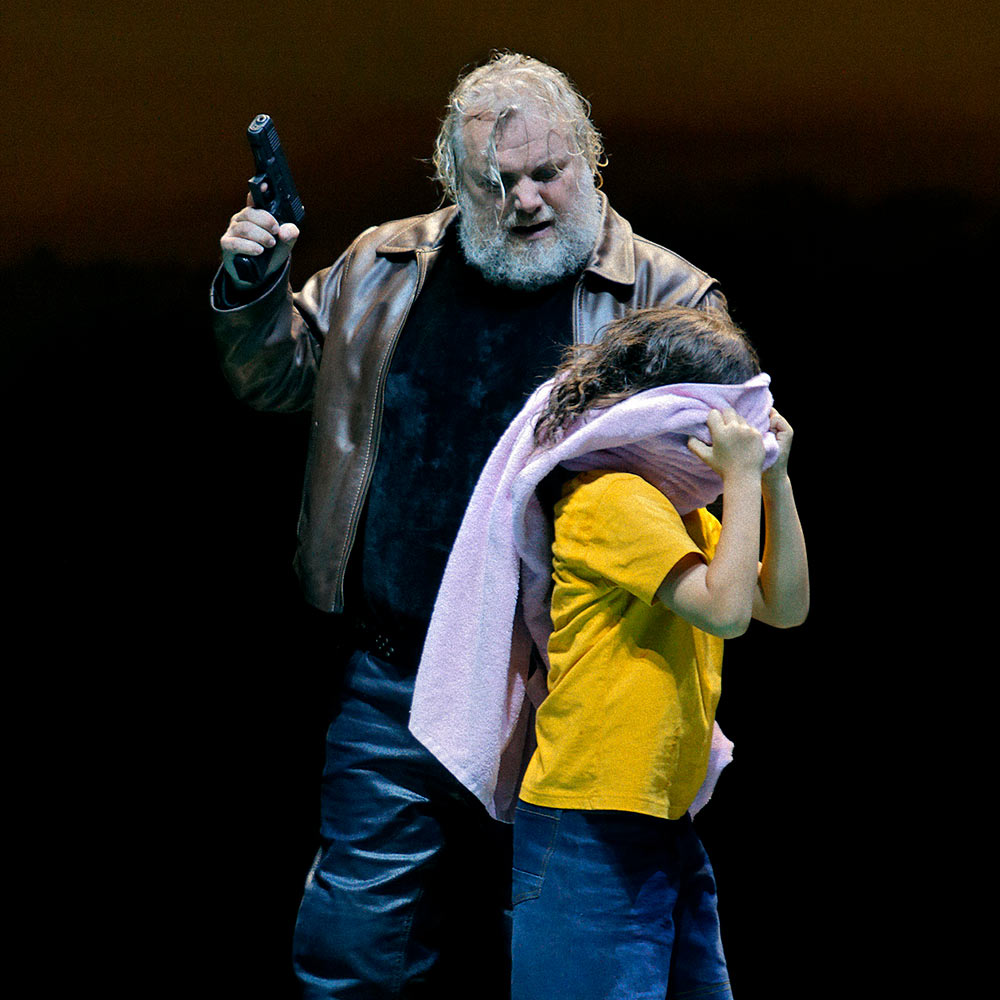 So too was it for the cast. Olafur Sigurdarson garnered the greatest cheers from the audience as Alberich, probably rightly so. His was certainly an outstanding performance, seemingly instinctively alert to the dramatic reality and implications of Wagner’s particularly dialectical blend of verse, music, and gesture. A blond Egils Silins—that dark/light antagonism again—offered a proper battle as his principal antagonist. Christa Mayer’s Fricka was thoughtful, considered, and personal in tone and delivery. Much the same, albeit far from the same, might be said of Okka von der Damerau’s Erda. Arnold Bezuyen and Daniel Kirch made much of their tenor roles, verbally and physically, as Mime and Loge respectively. Elisabeth Teige’s Freia offered proper beauty of tone, well echoed by that forlorn violin solo of ‘love’ in the orchestra. Jens-Erik Aasbø and Wilhelm Schwinghammer contrasted actions and motivations well in the giants’ roles. It was an impressive trio of Rhinemaidens we heard too, their ensemble warning in the final scene fatally apparent. As for what is to come, we shall see (and hear).