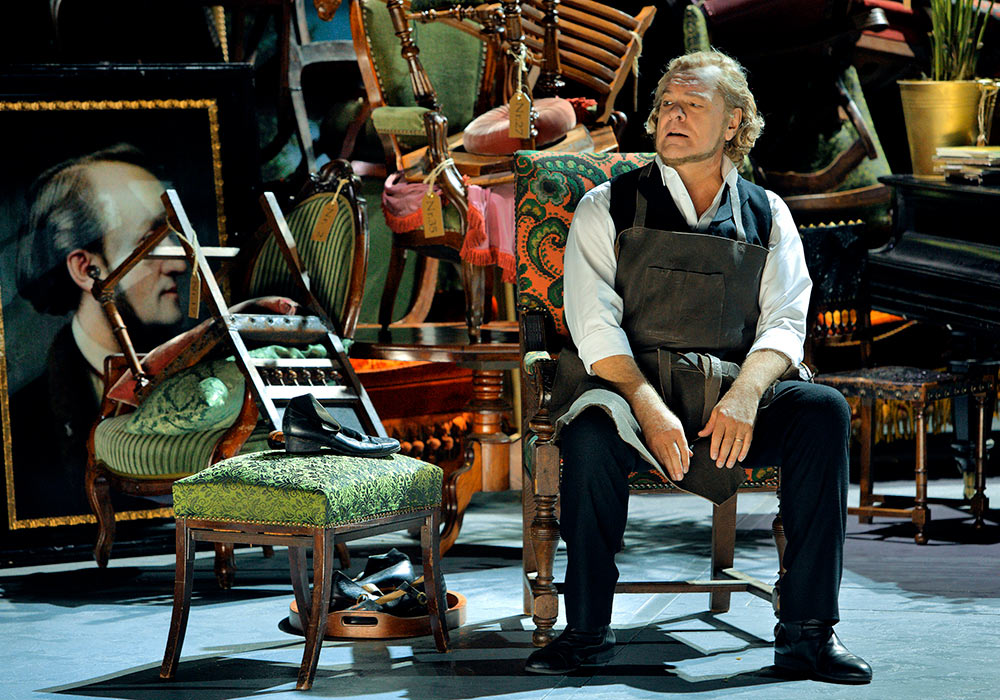 As a Wagner scholar, one becomes wearily accustomed to the most arrant nonsense being spoken and written about him and his work. The so-called ‘popular imagination’ – usually nothing of the sort, instead a carefully manufactured commercial view – will stop at literally nothing in its hunt for grievances. The actual problems Wagner’s work presents us with are far more important, far more interesting, but no matter. Perhaps worst of all is the pseudo-– very pseudo- – ‘literature’ that has been the bane of discourse concerning Wagner since at least the 1850s. It sells books, makes its way into newspapers; alas, it now makes its way onstage too. If only Barrie Kosky had been given a Wagner reading list by someone who knew what (s)he was talking about. Presumably his dramaturge, Ulrich Lenz, should bear some responsibility here; if his programme note is anything to go by, he surely does. Moreover, when we reach Kosky’s own note, we read the following extravagant claim, swiftly moving from the tendentious to the Ken-Russell-fantastical: ‘Wagner transforms medieval blood libel and reinvents it into 19th[-]century music libel. Jews used to drink the blood of Christian children but now they drink the blood of German culture. And for this crime, for this act of “Crimes against Culture”, Beckmesser must be expelled from Nuremberg. Rather like those little Jewish figures in the anti-Semitic 1930’s [sic] board game “Juden raus!”’

Where to start? Where does Wagner say that Beckmesser is expelled from Nuremberg? Wagner’s stage direction reads ‘Er [Beckmesser] stürzt wütend fort und verliert sich unter dem Volke.’  He dashes off in fury, then, and disappears into the crowd. He has been humiliated, yes, in a fashion that may contain disturbing traces of anti-Semitism but which ultimately owes more to Shakespeare’s Malvolio and to Wagner’s earlier comedic villain in Das Liebesverbot: Friedrich, hypocritical German viceroy of Sicily, permitted likewise to lose himself during that work’s carnival finale. He has certainly not been expelled, let alone on the grounds of drinking blood, metaphorical or otherwise. No, let us not bother: it is not worth it. No one ever listens; it is always easier – ironically, as in the case of anti-Semitism, Wagner’s own certainly included – to blame the ‘other’, in this case a manufactured Wagner of lies, half-truths, and the odd fact taken out of context. In any case, whatever the misunderstandings – let us try to be charitable here – presented in such talk, it is always possible that something dramatically engaging might result.

Does it? Alas not. Familiarity may have blunted somewhat the offence of this Meistersinger (first reviewed here) onstage, but that is the best one can say for it. Whether that offence spring from ignorance or dishonesty is arguably beside the point. So, however, are the production and its underlying ideology. Moreover, it remains irredeemably glib, surely a very odd standpoint if one actually believes the things Kosky claims to, punctuated as it is by reams of slapstick and trademark silly dances. (And no, Chaplin is not a helpful comparison here: not even slightly.) Still, notwithstanding a few boos for Kosky on a surprise curtain call, most of the audience seemed to love the ‘entertainment’ placed before it. Interpolation of all-too-predictable campery will usually elicit wild applause from a good few. Doubtless others will flatter themselves that they were made to think. I doubt, though, that they could tell us how. 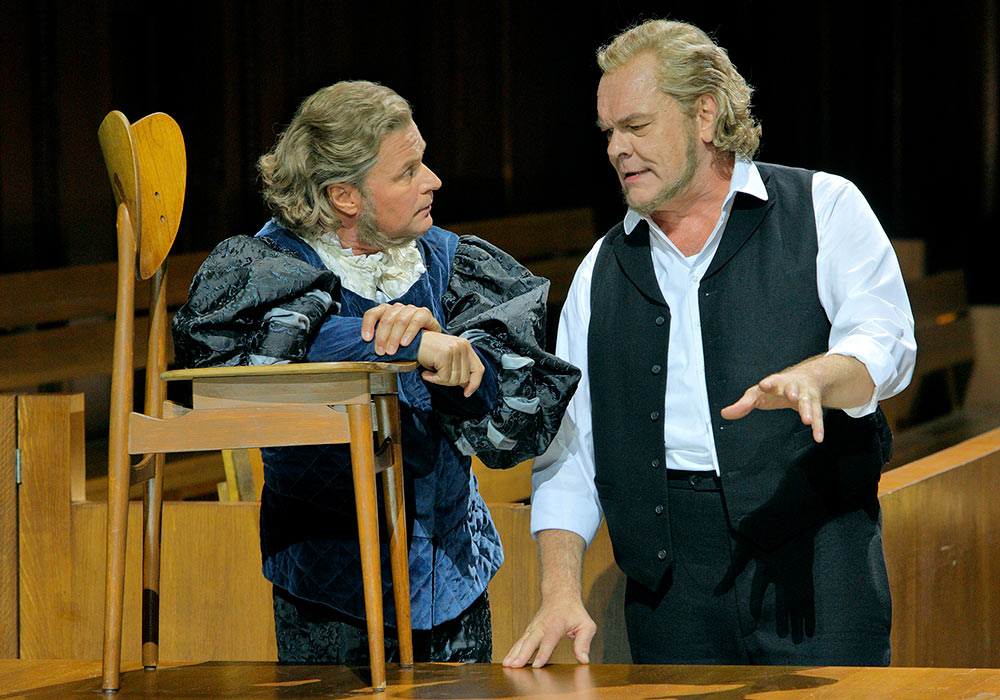 Once more, then to Wahnfried. It is not an original idea, but many things are not. What is ‘original’ – some might prefer ‘disingenuous’, ‘misleading’, or perhaps something stronger – is to present Die Meistersinger as somehow having originated there, in 1873, as part of an invented incident from Wagner’s life when he supposedly bullied Hermann Levi into kneeling and genuflecting. Wagner sometimes treated Levi appallingly, quite inexcusably; sometimes he treated him otherwise. What on earth that has to do with Die Meistersinger I do not know, given that he completed it in 1867. So all the alleged documentary evidence beamed onstage – including a temperature for the day, which some in the audience found side-splittingly hilarious – is untrue. It is not quite presented as ‘true’, of course, or at least it might be argued that it is not; it is difficult, however, to avoid the implication that it is so even then, still less when the production later becomes explicitly an attempt to put Wagner in the dock, on trial. No evidence for permitted: only (largely) manufactured evidence against. 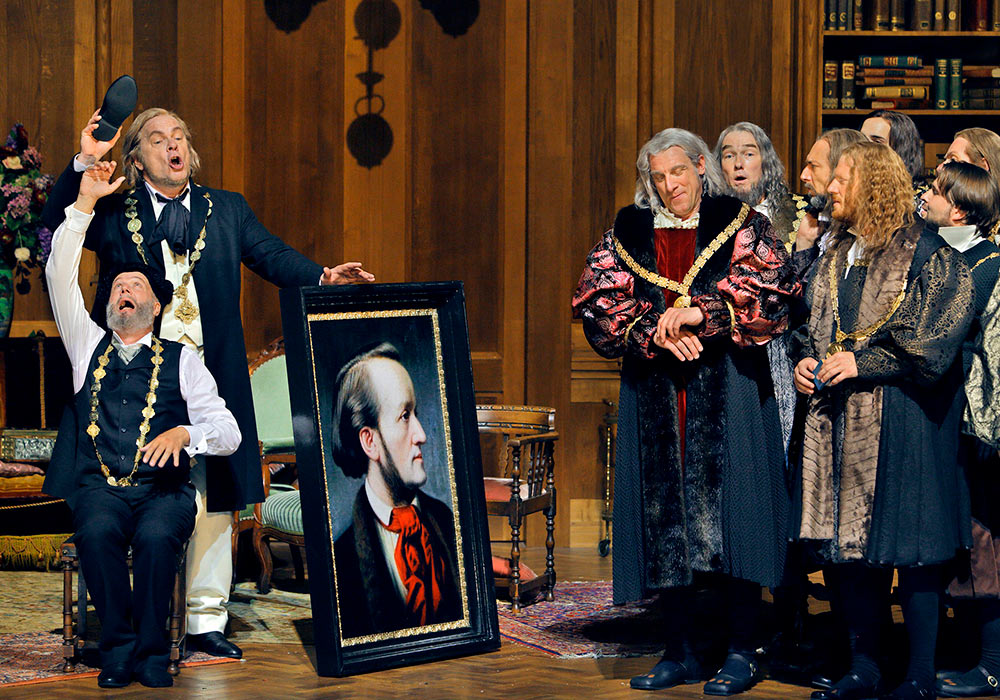 A weird play of confused, confusing identities ensue, in which not only does Wagner become both Hans Sachs and Walther – in a sense, of course, that is fair enough, if a little restricting – but Liszt becomes Pogner, giving away his daughter, Cosima/Eva. Why, then, is Levi/Beckmesser – yes, I am afraid so – also wooing Cosima? Hans von Bülow, maybe, even Nietzsche, but Levi? The Masters have to be made to loathe Beckmesser from the start, although the words and music tell us quite differently. Why? Because, in the typical circularity of so much writing on Wagner and anti-Semitism, Beckmesser is an unattractive character, doing unattractive things, and therefore must be… well, you know the rest. He therefore ends up the victim of a pogrom at the close of the second act, replete with gigantic, horrifying, Völkische Beobachter caricature of a Jew. None of it makes any sense, because none of it ever seems either to have been thought through or properly prepared. At the moment any difficult question arises, one can always have another silly dance, or zoom in on a Nuremberg courtroom in, you guessed it, 1945. Even better, do both. Why choose?

Goodness only knows who ‘Helga Beckmesser’, onstage harpist for Beckmesser’s attempted rendition of the Prize Song, is supposed to be. She can hardly be his wife, given that he is attempting to woo Eva, or Cosima, or whomever the poor woman is supposed to be; unless, that is, Beckmesser nurses aspirations to bigamy, which seems an eccentric way to work towards his rehabilitation. ‘Helga’ seems actually to be dressed like Helga from the 1980s BBC sitcom, ’Allo, ’Allo! but perhaps that is just a coincidence. I hope it is, at any rate. At least much of the second act is played out with greater theatrical awareness than last time, Wahnfried clutter providing a backdrop, rather than Sachs and Beckmesser simply sitting in a green space inside a courtroom. That is a definite improvement, but the concept, if we may call it that, remains beyond questionable.

Musically, there was much to admire. Philippe Jordan’s conducting was fluent and inobtrusive (the opposite of the production, one might say). He handled the massive orchestral and choral forces with great skill; they responded with all the excellence one should expect from Bayreuth. This was probably the best Wagner I have heard from him, perhaps because he responded so keenly to the affinities with Mozart. I was put in mind of Georg Solti, shortly before his death, speaking of recognition that much in this work should be conducted as if it were Così fan tutte. Michael Volle’s Sachs was as magisterial as ever: word, tone, and gesture an object lesson to all. So too, in different vein, was Johannes Martin Kränzle’s keenly observed Beckmesser. Their chemistry was a wonder to behold. Klaus Florian Vogt’s assured Walther and Camilla Nylund’s lively Eva were beautifully complemented by similarly excellent, yet contrasting, performances from Daniel Behle as David and Wiebke Lehmkuhl as Magdalena. The relationship between the two couples might justly have been described, in line with Jordan’s conducting, as Mozartian. Günther Groissböck’s Pogner was similar impressive, the guild at whose head he stood cast from commendable depth.

As for the production, Wagner and his works will survive; they survive worse most days. It does not follow that they should have to. 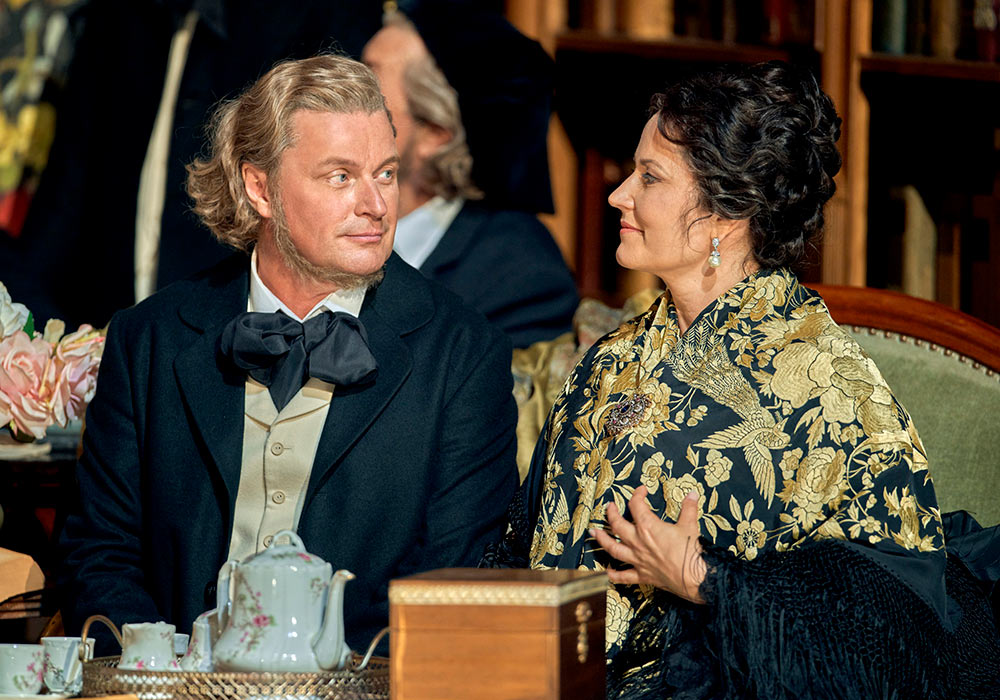