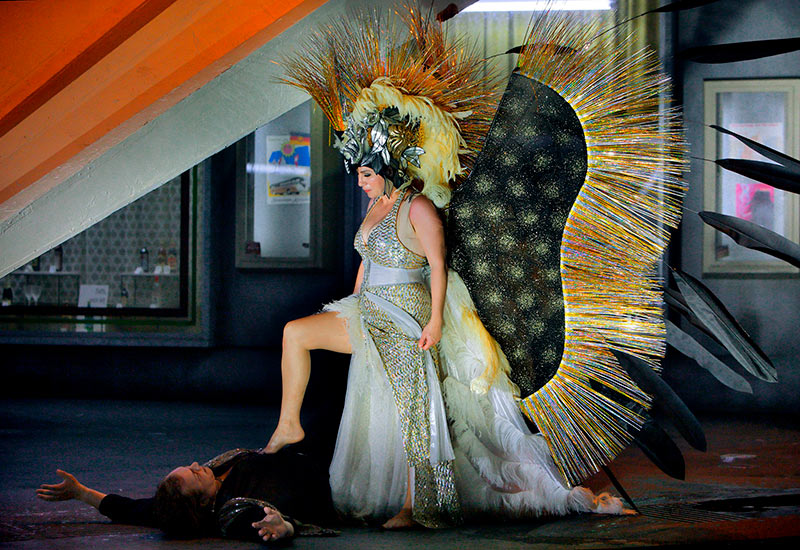 Mea culpa. I am by now convinced that this Ring has been far more strongly presented than it was when I saw it in 2014. (I have kept to my resolution not yet to re-read my earlier reviews, but shall do so once my visit to the festival is over.) Everything is tighter; revisions to the productions have been entirely to their benefit; the cast is much stronger, vocally and otherwise; the director seems less hostile to, although not necessarily less critical of, Wagner; and so on. And yet, the difference in my response cannot, I think, be explained away entirely in such terms; even if it can, I should rather err on the side of generosity. I am happy, then, to say that I owe Frank Castorf an apology.

Viewed overall, it was this Siegfried’s epic scope, quite in keeping not only with Wagner’s vision but with so many other dramatic works too, that struck me most of all. The word ‘journey’ has so been so debased by the lucrative language of ‘self-help’ – in some cases, in more than one literal sense – that it is perhaps too late to use it non-ironically; indeed, after Castorf, it is perhaps too late to view the Ring without some degree, at least, of irony. But the tale of the boy who learns what fear receives as probing and, in many respects, as sympathetic a treatment as I have seen for quite some time. There is no doubt of the distance both he and we have travelled by the close – and there is genuine (neo-Feuerbachian?) hope to be experienced, especially at the ends of the second and third acts. It is not hope that is unalloyed; nor should it be. (Listen to the words in the nihilistic ecstasy of Siegfried and Brünnhilde’s duet, if you doubt me; listen also to the disturbing contrapuntal virtuosity of Wagner’s music there, both attempting, so it seems, to conceal and yet to celebrate the terrifying, pyromaniacal marriage of Bakunin and Schopenhauer.) But it celebrates, as did Marek Janowski, in what proved unquestionably his strongest performance so far, the very particular character of what, for once, truly emerged as, according to the cliché, the ‘scherzo’ of the Ring: less of a cliché, if one considers, post-Beethoven, what that might actually mean, both for Wagner and for us. If the Wagnerian hero would be a Hegelian, world-historical figure, responding to contemporary necessity; so must our (anti)hero be. For, as Feuerbach pointed out, ‘God did not become man for his own sake’; nor do we produce the Ring solely for Wagner’s.

Aleksandar Denić’s sets remain a thing of wonder – and wonder is surely an epic quality in itself. The sublimity – gone right, or gone wrong? both and neither? – of the alternative Mount Rushmore backdrop reminds us that much is at stake. Irony need not be ornamental: ask Heine. As Marx, Lenin, Stalin, and Mao look down on us, as we look up to (or down on?) them, as occasionally their faces metamorphose into those of others, unreliable narration kicks in once again: do we know the newcomers, both here and on video, or not? Is this actually, then, an alternative historical path? Can we, as Wotan still wishes, at least some of the time, avert Götterdämmerung – or, perhaps worse still, a return to the non-golden-age of the Golden Motel. What is intervention? Is it desirable, or even possible? As with the shocking golden concealment of Freia – and it was, for me, impossible not to hark back to that moment – the machine-gun brutality of Siegfried’s murder of Mime truly terrifies, truly casts its shadow. As the riddles, the narrations, play themselves out, Wagner plays along; or rather leads us – and the production. Does it mean anything, then, when Wotan rejects Fate (Erda)? Or has that idea been (rightly or wrongly) jettisoned? There are no easy answers, or indeed perhaps any answers at all, just as in the Ring. 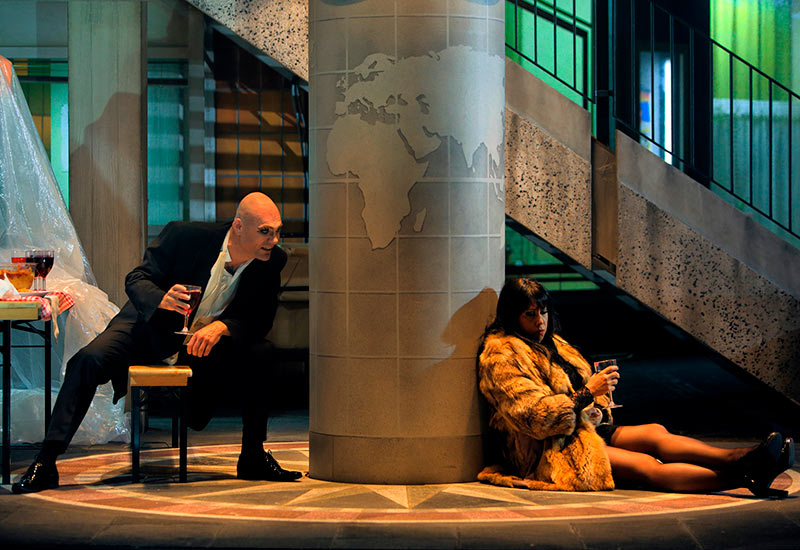 But Wotan rejects Erda not in that location, of course; he rejects her on the other side of the revolving set, the extraordinary recreation – well, knowingly unfaithful creation – of Alexanderplatz, first seen, if I remember correctly, which is not necessarily the case, as a playground for Fafner and his floozies. It is at least as much a thing of beauty as the other side of the dialectical wall (or even Wall). And, crucially, like that other side, yet also unlike it, it is, as stations and their surroundings tend to be, a place of liminality. Whether or no we may salvage the idea and the experience of a ‘journey’, we seem fated, Wanderer-like, to remain in transit. We find meaning and meaninglessness in Everyman Patric Seibert’s activities, whether as house-animal-cum-servant chez Mime, the Nibelheim van pressed back into service, or as waitor-cum-post-office-manager in the mysteriously empty – in more than one sense – proceedings in East (is there even a West?) Berlin.

I did not regret the loss of the more excessive spaghetti-founded activities in the first scene of the third act. I most certainly did appreciate Erda’s varied reprise of her Rheingold actions. Having worried, with her assistant on film, about which wig to wear during the Prelude, she disappears and changes it for her final exorcism and/or intensification of Wotan’s Rheingold possession, consensual or otherwise, of her – which, amongst other things, may well, through the creation of Brünnhilde, have enabled the rest of the action to unfold. What had previously seemed to me – rightly or wrongly, in the context of the 2014 production – arbitrary, even plain silly, now seemed charged with meaning. Returning to the scene, unquestionably ‘up for it’, Erda asks us difficult questions about what we should do, faced with a god, or a God. Just as our politicians will fellate the nearest banker without a moment’s thought, so does she get to work – and so does Wotan contemptuously slip his banknotes where one might expect. Her final finger-gesture to our hapless waiter as he returns for his payment is a splendid gesture: again rich in both potential meaning and meaninglessness. Ditto the now ‘traditional’ addition to the now five-strong crocodile community. What, two years ago, to me seemed a mere scenic backdrop – or, at least some of the time, did so – is now crucial to the drama.

Janowski’s conducting, as I mentioned above, came much more into its own. Perhaps that personal impression of mine is owed, at least in part, to a long-term strategy on the conductor’s part. Many conductors, after all, present Das Rheingold in buttoned-up, almost frigid fashion. Nevertheless, there is, I think, more to it than that. The greater sense of ebb and flow, of harmonic ‘depth’ – yes, I know it is a nineteenth-century, Germanic, ideological construction, but is no less useful for that – was palpable and, more to the point, dramatically productive. Balances were much less problematical too. If wind instruments often, although not always, came to the fore, there is nothing wrong with that. There is arguable Beethovenian warrant for it; and we want to hear, of course, as much as is possible. The Bayreuth Festival Orchestra now, for the first time, seemed very much to be the same orchestra – if not necessarily quite so consistently – as that I had heard for Thielemann’s Tristan. Pacing, whether longer- or shorter-term could not really be faulted; it may not always have been how I imagine it in my head, but that is neither here nor there. 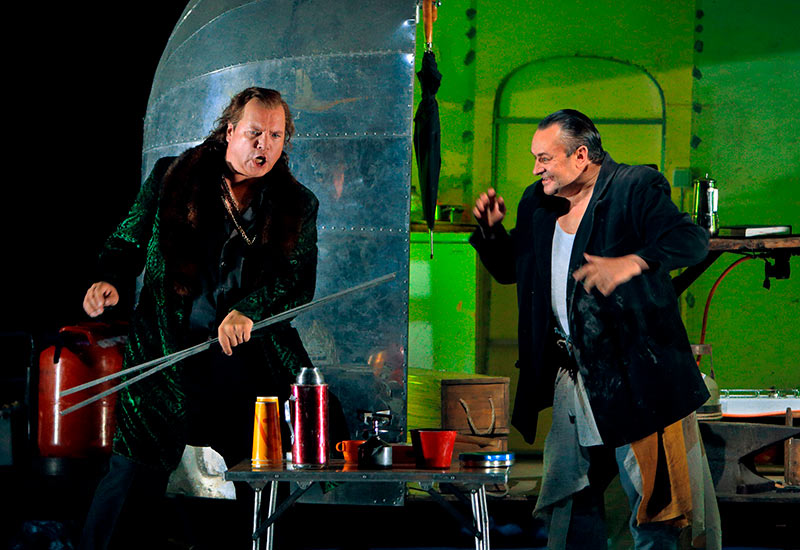 The cast was excellent too – and here, I think, we may come to the core of why I found this Siegfried so much more convincing than I had before. Lance Ryan’s Siegfried, however adept on stage, had been excruciating vocally; Stefan Vinke gave the most convincing vocal performance I have heard from him in quite some time, clearly benefiting from not having to force his voice to fill an absurdly large theatre. He entered into the stage proceedings with equal commitment too. As with the previous night’s Tristan, ‘untiring’ should not be understood here as a euphemism; pent-up energy spilled carelessly onto the ground, as it must in the case of this rebel without a consciousness. Catherine Foster gave a splendid performance – much more at home in the production, and in the role, than I found her last time – as Brünnhilde. Her problem is not to be untiring but, so late in the evening, to be immediately fresh, dramatically immediate; the problem proved not to be such, simply an opportunity very well taken. One truly felt her transition from immortal to human, its joy as well as its fears.

John Lundgren’s Wotan/Wanderer exceeded even its Walküre promise. His performance, born very much of the detail of Wagner’s poem, equally alert to the implications of its musico-dramatic flowering, was one for the sagas – mediæval and contemporary. Albert Dohmen’s highly intelligent portrayal of Alberich was spot on: as quicksilver in momentary response as it was determined by what had gone before. His verbal acuity was shared, responded to, by Andreas Conrad’s Mime: a brother-in-arms indeed. Karl-Heinz Lehner’s Fafner was just as sinister and, intriguingly, just as darkly, dangerously attractive as what we had seen and heard his Rheingold incarnation. What we lost in rentier sloth, we gained in other respects. Nadine Weissmann retained and developed that wonderful sense of musico-dramatic ‘presence’ from the earlier drama. And Ana Durlovski’s carnivalesque Woodbird came across – rightly, in the spirit of the production – as more woman than voice of Nature. I may be nearing the moment of a mea maxima culpa.