So this is it: Frank Castorf’s notorious Ring. There are various caveats: what I see may well not be the same as what audiences saw last year; this is only Das Rheingold, with the rest to come. However, whilst there is a good deal about which to be frustrated, not least the lengthy passages in which Castorf appears to lose interest, or at least I lost interest in him, and whilst it would e difficult to acclaim his attentiveness to, or even his interest in, Wagner’s music, this proved of considerably greater stage interest than some other recent staged Rings. Guy Cassiers’s production for Berlin (and La Scala) may have been blessed with a superior cast and a far superior conductor, but its lack of any ideas whatsoever made it an inferior production when considered only as such. Stephen Wadsworth’s Seattle Ring was similarly inert in stage terms. Ironically, Daniel Barenboim’s Proms performances have proved not only the most satisfactory of recent years, but perhaps of my entire Ring-going experience, with the possible exception – again, ironically – of previous minimally-staged performances at the Royal Albert Hall from the Royal Opera under Bernard Haitink. 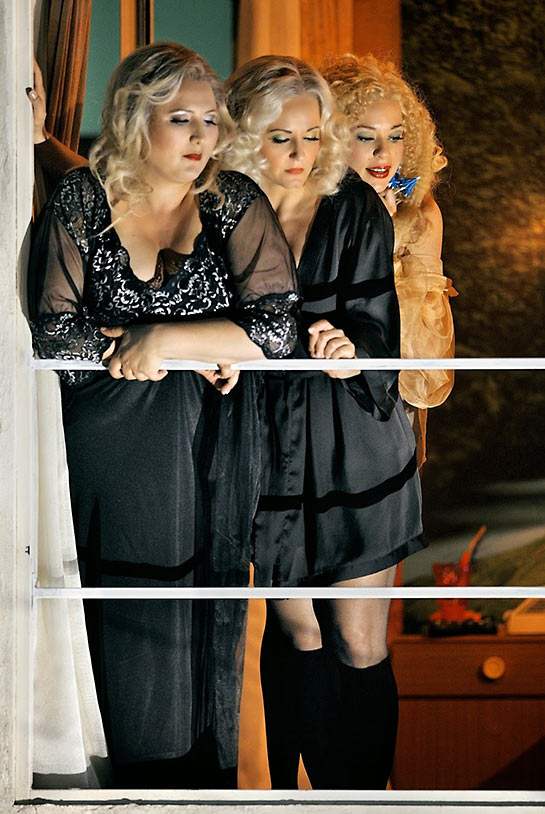 Anyway, back to Castorf. This Rheingold has ideas of considerable promised and moments of real dramatic power. The Texan setting of the ‘Golden Motel’ on Route 66 is undeniably not one for those who want their Vorabend to develop in an elevated setting; just as undeniable is the loss, common to many stagings, of anything that might make clan Wotan something akin to gods in the first place. Ernst Bloch may have said that these were gods without being gods, but that is far from the whole of Wagner’s story. Listen to the score – as Castorf seemingly never does – and you will hear noble inspiration in Wotan’s dream of Valhalla. Wagner’s Feuerbachian understanding of religious inversion, which underpins not only Wotan’s sacerdotal fortress but also, by ‘true socialist’ extension, Alberich’s conversion of gold into capital and his construction of Nibelheim, is disregarded, again as so often, in favour of something cruder, more one-sided, far less interesting. 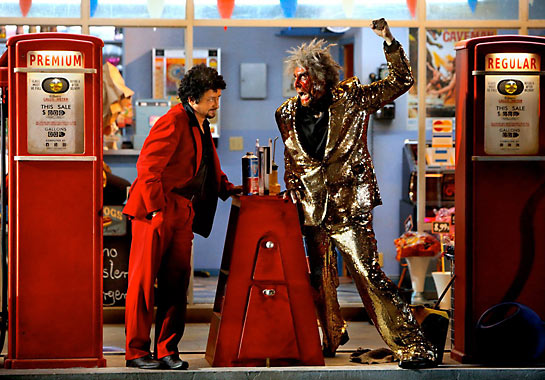 If we can take the debased setting, however, and perhaps even wearily concede its validity in our appalling late-capitalist plight, we shall find, alongside the irritations and provocations, more to engage us.  The use of film, far too often a trendy addition which adds little or nothing to an opera staging, here stands at the very heart of the dramatic representation. A screen at the top of the motel relays events elsewhere, some of which we can see on stage very well already, some of which we can see with difficulty, some of which we should otherwise not be able to see at all. They may be in the ground-floor bar, run by an initially hapless but perhaps ultimately successful, extra, who comes in for abuse from Alberich, Wotan, and others, but has us wondering whether he will prove a survivor in the longer run. They may be in the sleazy motel room above, in which we first see Wotan dream of power, in bed with Fricka and then with Freia. (The latter seems to me perfectly justifiable; after all, is not the very point of the gods’ relationship with the alleged goddess of ‘love’ that they use and abuse her for the promised immortality of her apples. For apples here, we should probably read stereotypical ‘female assets’ from American trash culture.) The faded quality of the film, its distorted colours in particular, have us wondering – or at least they did me – whether what we are seeing is ‘real’ at all. Katie Mitchell-style filming might be taking place, sometimes overtly with a cameraman, sometimes covertly as befits our surveillance culture, but discrepancies seem to creep in, whether by design or by our own unreliable narration. The world of webcams and ‘reality television’ is never far away: discomfortingly, we participate whilst we disdain. Perhaps this is after all a neo-Feuerbachian inversion for our time. The dialectics are certainly unremittingly negative, as befits a post-Adornian world. And indeed the moment of greatest dramatic power for me was the truly shocking covering of Freia with gold bars, the motel bed stripped to its frame as, clad in trashy, eye-catching PVC, she found herself submerged by the stolen hoard. In many respects, it was the most literally-minded scene of all, and perhaps drew some of its power from (more or less) trusting Wagner for once, but filming and voyeurism made it sickening beyond any depiction I can recall previously having seen. 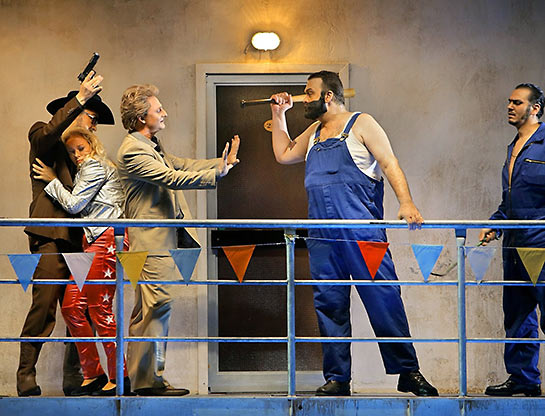 What truly frustrates, then, is that Castorf fails to live up elsewhere to that promise. I could not help but have the sense that he would have been better off presenting a Ring, cut as he would do so with other theatre, somewhere other than the Bayreuth Festival, which could hardly have been expected to acceded to his requests for reworking the text. (Nor do I think it should have done, which perhaps marks me down as being of the reactionary camp, but so be it.) The third scene in particular drags – and certainly not on account of Kirill Petrenko’s tempi, which were uniformly, excessively fast. Here I sensed Castorf’s impatience with Wagner’s narrative. It is an odd thing not to find Alberich and Nibelheim of dramatic interest; too often, though, they seem awkwardly tacked on to the rest of the drama. There are smaller irritations too, for instance, irrelevant, noisy interruptions, such  as Alberich kicking a beach ball around during the Rhinemaidens’ hymn to the gold. (Their antics around the motel paddling pool, filmed for ‘cultural consumption’ otherwise work well on the whole.) The appearance of a rainbow flag for the entry to Valhalla obfuscates. Presumably a ‘joke’ alluding to Froh’s rainbow, it adds nothing since it is not developed. Is that what the gods’ going up in the world – or in Heaven – really amounts to: the motel turning gay-friendly? In the absence of any other allusions to homosexuality, it just seems silly. What appears to be the drug-induced stupor of the bar guests, seemingly aroused by whatever Donner’s summoning of thunder translates into here, is more suggestive, whether intentionally or otherwise. Political and religious power does not only stupefy, but stupefy it nevertheless does. 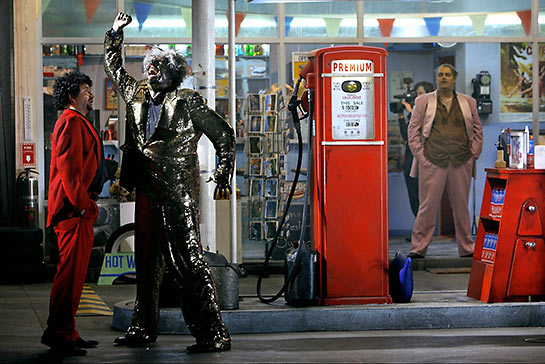 Rarely does there seem to be any synergy between what we see on stage and what we hear in the pit. Petrenko was – to my ears, bafflingly – acclaimed louder than anyone else by the Bayreuth audience. His account was not bad; it was certainly preferable to the aimless incoherence we in London have had to suffer time and time again from Antonio Pappano. Line and, above all, drive were maintained almost ruthlessly. But it was a musical account almost as one-dimensional, though not in the same way, as Castorf’s stage direction. Indeed, I am not sure I have heard a less variegated Wagner performance. Furtwängler – or Barenboim – this certainly was not. At times, it sounded more akin to Toscanini conducting Mendelssohn. Fashionable obsessive concern with Wagner’s early-Romantic roots hardened into something very much of our time, a refusal or even inability to yield; Wagner was held captive by something approaching turbo-charged automation. The orchestra itself sounded more than usually ‘covered’ by the covered pit. Was Petrenko struggling as much with the acoustic as with anything else?

There was a fine trio of Rhinemaidens, which augured well, though such augury was not entirely to be trusted. Wolfgang Koch’s Wotan grew in stature as the evening went on. Whether by design, I was not entirely sure, and there were some early moments that were straightforwardly rough, but there was enough here to hold promise for later on – especially if Castorf allows the god to be more than a mere gangster. Oleg Bryjak’s Alberich had his moments, but had a tendency to rely upon caricature that shaded into crudity; when he permitted himself – or was permitted – to concentrate upon singing, there was a voice to be reckoned with. Though Mime’s role in Das Rheingold is not so great, Burkhard Ulrich nevertheless managed to outshine his ‘superiors’ in an attentive portrayal (at least in verbal and musical terms!) As Fasolt and Fafner, Wilhelm Schwinghammer and Soran Coliban increasingly impressed too. It was a nice touch to have a Fasolt who was actually for once a credible prospect of attraction for Freia, whether or no she felt the same way. The brothers proved increasingly differentiated in character through verbal and musical means at least as much as through staging. Claudia Mahnke’s Fricka was initially shrill, unalluring in the wrong way, but improved considerably. Elisabeth Strid’s Freia, whatever one thought of Castorf’s stage portrayal, offered something that went far beyond the merely tawdry. Nadine Weissmann’s Erda – her fur-coated, Dallas-style appearance presumably indicating a ‘classiness’ as elevated as Castorf is willing to countenance – proved welcome in vocal contrast, though Petrenko’s hurrying did her no favours. Markus Eiche’s Donner and Lothar Odinius’s Froh followed the general pattern of really coming into their vocal own in the final scene. Norbert Einst’s Loge likewise followed suit, though again, I think that was as much a matter of the production as anything else. It is difficult, however, to believe that, taken as a whole, this is the level of singing upon which Bayreuth should be able to call; a standard at least approaching Barenboim’s Proms Ring should surely be the norm here. On, then, to Die Walküre: with trepidation but also with interest…