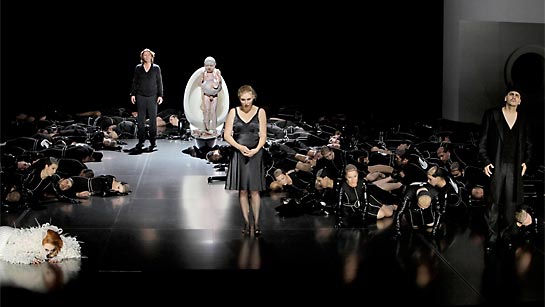 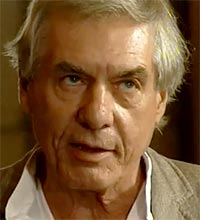 I found much to admire last year in Hans Neuenfels’s production of Lohengrin, though equally voiced a few reservations. This time around, perhaps having overcome my initial surprise at the now-celebrated infestation of rats, I found little to quibble about at all. Indeed, the production seemed elevated almost to the level of a companionable yet still provocative classic. Direction appeared still tighter, and I did not feel there were many, if any, instances of working against Wagner’s score; indeed, subtle distinctions of movement, which I am not convinced were necessarily there last year, suggested commendable consonance. Where there was simply too much confusion in the previous evening’s Flying Dutchman, there could be little doubt that we were seeing what we were meant to see. At the heart of Neuenfels’s production, or at least my understanding of it, remains the experiment, into which Lohengrin first, unsuccessfully, tries to break, towards the end of the First Act Prelude. He eventually gains access, yet that initial failure is noteworthy: whoever is in control, it is not Lohengrin. Nor is it King Henry, who is dragged off-stage by the mysterious attendants – redolent perhaps of those enigmatic ‘authorities’ to whom Don Ottavio refers in Don Giovanni. Indeed, the king is clearly a flawed, even wounded, perhaps Amfortas-like character: an intriguing and utterly convincing conception. Interestingly, two instances of characters throwing off the shackles of supervision are Ortrud and Lohengrin, arguably when both are at the height of their powers during the second act. So no authority is absolute, perhaps, though whatever this is – Fate? The near-omnipotent surveillance of late capitalism? The illusion of the Gesamtkunstwerk?– manages to reassert itself, before bringing forth the fragile infant figure of Gottfried from within an egg. (Incidentally, I cannot now imagine why I found that problematical last year, so it is time to recant.)  One of the most telling aspects of the staging is the impatience, at moments shading from frustration into anger, that Lohengrin experiences with respect to Elsa. Neither of these characters is a saint.

Andris Nelsons’s conducting had progressed by leaps and bounds; it certainly proved more coherent than either Philippe Jordan’s account of Parsifal or, perhaps more surprisingly, Christian Thielemann’s sometimes brilliant yet sometimes flawed conducting of The Flying Dutchman. The orchestral sound was aptly golden, more redolent of Vienna than anywhere further north. Ebb and flow were splendidly judged throughout, with none of the mannerisms that intruded from time to time in 2011. At the risk of sounding like a stuck record, Eberhard Friedrich’s chorus was magnificent: absolutely crucial in this work, of course; the chorus members’ acting as part of the pliable, threatening mass was equally exemplary.

Klaus Florian Vogt would seem to have been born to play Lohengrin. The unheimlich quality of his voice meshes perfectly both with role and production. What a relief it is not to have to endure a strained or downright unpleasant tenor in this repertoire, even if I thought there were just a few occasions this year when he might have been guilty of coasting towards slight blandness. That said, there were many instances not only of unearthly beauty but of fine dynamic shading and phrasing. Moreover, Vogt looks the part, which one can hardly say of Johan Botha, the most recent Lohengrin at Covent Garden. Annette Dasch may not have been the most memorable of Elsas, but she offered an attentive, varied assumption, far more secure than Astrid Weber, whom I heard as a late replacement for Dasch last year. Thomas Johannes Mayer was an excellent Telramund, both forthright and sensitive. If Susan Maclean paled somewhat in comparison with Petra Lang’s Ortrud in 2011, Maclean’s tone lacking refulgence, she nevertheless did as much to compensate with stage presence as she could. (The final scene seemed overdone, though that may well have been a matter of direction: here, Ortrud seemed less drunk with power than merely drunk.) Samuel Youn was on better form as the Herald than he had been as the Dutchman the night before, though intonational problems reared their head again. The splendidly named Wilhelm Schwinghammer was an excellent King Henry; it is a fine achievement to sing strongly and yet convincingly play the role of a weak man, as opposed to acting weakly.

This production is now available on DVD, filmed last year. Though I have not actually seen the DVD, my experiences this year and in 2011 render me reasonably certain that I can, indeed should, offer a firm recommendation.