Daniel Barenboim is considered by many to be the most important Wagner conductor today. He has conducted all the major operas around the world. His base has been Berlin and Bayreuth.

Barenboim first appeared at the Bayreuth Festival in 1981 in Jean-Pierre Ponnelle's production of Tristan und Isolde (the one where Isolde's appearance in the 3rd act is just Tristan's fantasy or dream). Between 1981 and 1999 Daniel Barenboim conducted 161 performances in Bayreuth, appearing almost every year.

In 1999 Daniel Barenboim jointly founded the West-Eastern Divan Orchestra with Edward Said (1935-2003). The members of the orchestra are Israeli, Palestinian, Lebanese, Syrian, Jordanian and Egyptian musicians.

“I enjoyed working with Barenboim a great deal. He had a lyrical approach, which suited my voice well, and always worked closely with the singers to achieve his effects. He was very supportive and the only problem I encountered was that he would sometimes shift tempi too rapidly for the singers to adjust; I felt that this may have been due to his long experience as a solo artist, where he could make more rapid changes in mood on the piano than when he was conducting a large orchestra and a group of singers in performance.”
Johanna Meier in interview with Wagneropera.net 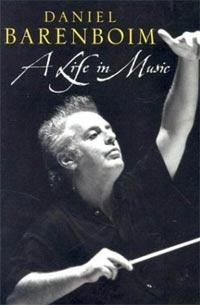 Barenboim's departure from the Bayreuth Festival

“I never made a conscious decision to leave Bayreuth. It was a process of evolution. In 1997, I decided I wanted to return to Argentina in the summer of 2000, because I had played my first piano recital in Buenos Aires on 19 August 1950. The desire to return and play a concert in Buenos Aires on 19 August 2000 ran in a slightly sentimental vein. I would have preferred to appear in the same hall, which was very small, but it does not exist any more. Therefore, the concert was to take place at the Teatro Colón instead. I shared my thoughts with Wolfgang Wagner, who understood perfectly well, and I told him jokingly that, like a true criminal, I had to return to the scene of the crime. Ideally he would have liked to have someone conduct Meistersinger in my absence. However, as we pondered the options, it became clear rather quickly that it would have been very impractical to have someone else conduct it for one year, and have me come back the year after. It made more sense to have the same conductor in 2000 and also in 2001. So the decision to leave was simply the result of reason and timing.”