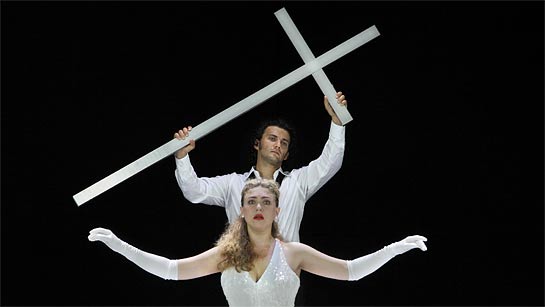 Hans Neuenfels' new production of Lohengrin brims with a wealth of extraordinary, expressive detail. Visually stimulating, it features a talented cast, and a superb conductor in the young Latvian Andris Nelsons. Bayreuth is again at the forefront of avant-garde Wagner theatre.

A central theme in Neuenfels' Lohengrin universe is that of redemption. Neuenfels proposes that redemption – if indeed real and attainable – can only be achieved through the diligence of the individual. It cannot be realized through an external actor, and certainly not one in the form of a religious or political leader. 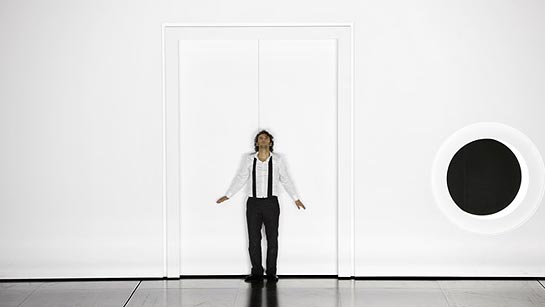 Lohengrin: The time is out of joint; O curs'd spite, That ever I was born to set it right! It's just too much for him.
Photo: Enrico Nawrath/Bayreuther Festspiele

Directly from the prelude a strong connection is established between Lohengrin and the audience, emphasizing that he is just an ordinary guy. As the curtain rises, Lohengrin leans exhausted towards an expanse of white wall, as if he has surrendered. He is on "our" side of the stage. Later, the raising of the house lights during Lohengrin's entry ("Sieht, ein seltsam Wunder") is also effective in establishing a link between the character and the audience. Redemption lies within us.

Lohengrin then starts to push the wall to the rear of the stage, and makes room for the play to begin. In doing so he leaves space for questions to be asked and an experiment - an experimental play - to be performed.

Following the prelude, the stage swarms with rats. It would seem that we are in a laboratory where experiments are being carried out. We gradually come to realise that the experiments may be about life itself; the meaning of life, no less, and the nature of love in a world of rats. 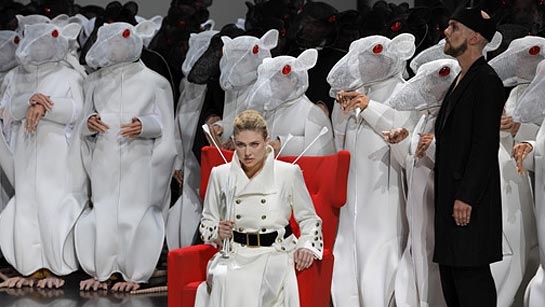 Elsa von Brabant is the subject of cruel accusations, while the helpless, indecisive king holds his title without authority. He can barely stand - quite literally - on his own two legs. The people need a new leader, but Neuenfels avoids the obvious political interpretations the opera invites from recent German history. He even chooses to rewrite Lohengrin's last words, "Seht da den Herzog von Brabant! Zum Führer sei er euch ernannt." By substituting "Schützer" for "Führer", as others have done before, the link between Nazi ideology and nationalistic themes in Lohengrin is avoided. German history is not an important element of Neuenfels' project. Instead, he mixes playful theatricality with serious existential issues. The result is both innovative and surprising. It is as if we are experiencing the drama for the first time. 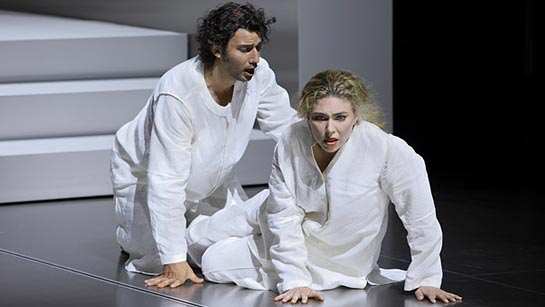 Lohengrin (Jonas Kaufmann) tries to find out if love is possible in this world. Elsa (Annette Dasch) feels the forbidden question explode inside her. Photo: Enrico Nawrath/Bayreuther Festspiele

The German symbol of Justice, the oak (here a potted plant), and the King's throne (a red chair from Ikea?) are wheeled in on a trolley by the laboratory technicians, elements underlining the fictional nature of the production. We are constantly reminded that this is just a type of play, Spiel, or Schauspiel, and not psychological realism. But, whether you accept this or not, it is, nonetheless, deadly serious.

To this inhuman world, Lohengrin enters as "redeemer". Not only is he expected to save the wrongly accused Elsa, but also an entire society on the verge of collapse. But this is too much for Neuenfels' Lohengrin; he is just a regular guy with a desire to explore love.

Act 2 begins outside the laboratory. A dead, black horse lies centre stage. Behind it, a black carriage. Suitcases are strewn all over. Ortrud and Telramund – both strong personalities in this production – have failed in their attempt to escape from this surreal, cruel world. Everyone is trapped in the experiment: There is no escape. 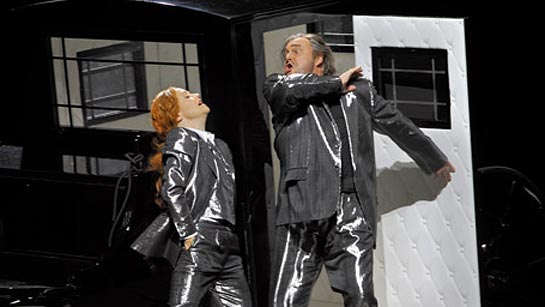 During the interlude before the third scene in Act 2, there is a both funny and disturbing “play within the play”. Two rats are on the run. Laboratory technicians pursue them, and eventually the rats are caught and killed by lethal injection, while the technicians laugh scornfully. However, the rats later rise from the dead and take revenge on the technicians. This is Night of the Living Dead. In this universe, nothing is safe.

The production is rich in such scenic and dramaturgical detail: the ambiguous cartoons, the grotesque ending, and the glass wall in which the conductor is reflected, to mention but a few. One detail that had an exceptionally strong impact occurs at the end of Act 2 when Lohengrin and Elsa's wedding procession is interrupted by two laboratory technicians who take the cross apart. The cross here is not a Christian symbol, but a symbol of faith, hope and love – ideals incompatible with the philosophy of the bad guys who rule this inhuman world. In a dramatic move, Lohengrin wrests the pieces of the cross from the technicians and resolutely holds them together over Elsa as the procession and the second Act come to an end.

The production leaves us with many unanswered questions: Why is it that Lohengrin, the Herald, the King, Ortrud, Elsa and Telramund do not possess rat-like characteristics? Are they different? And the role played by the Herald (wonderfully sung by Samuel Youn) in the laboratory is unclear. Seemingly unaffected by the drama, he acts like some sort of theatre manager with a surreally high phallic hair-do. 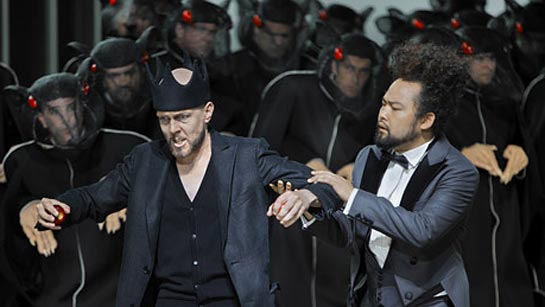 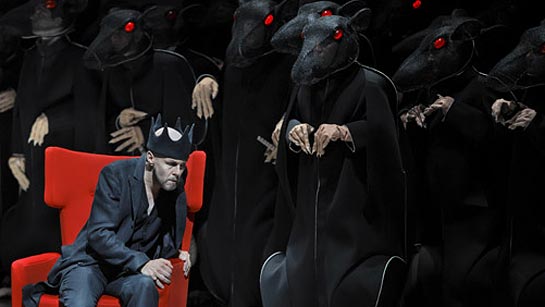 The mellifluous tones of Annette Dasch’s Elsa were a suitable accompaniment to the vulnerability of Jonas Kaufmann’s Lohengrin. Nonetheless, I would have preferred her diction to be clearer – words weren’t always easily discernible. Evelyn Herlitzius, as Ortrud, has  a powerful stage presence. However, she has a tendency to sing overdramatically throughout, thereby diminishing the overall dramatic effect. Tighter direction would have brought out more nuance in her character. And while Hans-Joachim Ketelsen offered a capably sung performance as Telramund, he was often drowned out by the orchestra. Special mention must be made of Georg Zeppenfeld (King Henry) and Samuel Youn (the Herald). Both sang impressively, with commitment and conviction.

In spite of the impressive performances on the stage, the hero of the evening was to be found in the orchestra pit: Andris Nelsons, in his debut on the Green Hill, gives a convincing reading entirely in keeping with the existential problems presented in Neuenfels' conception of the opera. Responding with absolute focus and ardency, the orchestra delivered an intense, string-dominated performance.