If Katharina Wagner's Meistersinger opened with Hans Sachs standing over the fire, accompanied by the beautiful but terrifying "Wach auf!" chorus in Act 3, it would be one of the most interesting, disturbing and provocative Meistersinger productions I have ever seen. 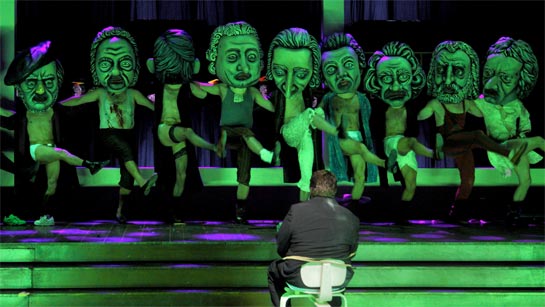 From "Wach auf! Es nahet gen den Tag" through to the final curtain, this totally new reading of Wagner's comic music drama is a masterpiece of operatic production. Katharina Wagner’s version overturns all previous concepts and productions, and in doing so unmasks the darker sides of Wagner's world (be it historical or theatrical). Her version emerges as a veritable revolt against her parents’ generation, their suppression of the Nazi past, and of her father's trivial, nonsense productions of this opera at Bayreuth.

The shocking image of the shoemaker Sachs, first at the "Wach auf" fire scene with its Holocaust connotations and later as the prototype of a heartless, ice-cold leader - I am trying to avoid the term "Führer" - warning the people not to despise the German masters, is a striking new interpretation. The parody of the prize song is inspired, and the amphitheatre rising from the stage floor, a technical wonder. Together with the slow-motion, nightmarish applause of the faceless masses (the German "Volk"), and the transformation of Beckmesser into a hero of “entartete Kunst” who has to flee to avoid being persecuted, the production is totally convincing and brilliantly staged. It is also a bold act by Katharina Wagner to present the conservatives with such a daring concept. 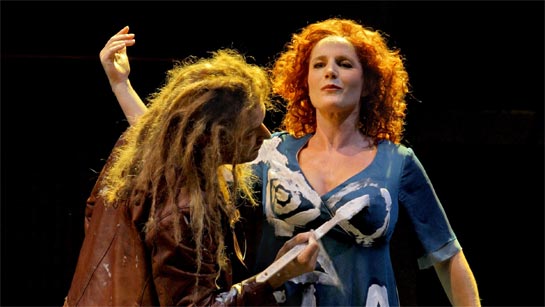 But, alas, the opera consists of more than the final thirty minutes of Act 3. The journey to the point when the production actually gets interesting is a wander through a visual desert of the dullest sets. The ineffective direction of the singer-actors is quite apparent, with each device more ridiculous than the last. A new feature this year was to have the Mastersingers participate in a form of communion service where each of them eats a page from a copy of a Reclam book and then kisses the others, one by one, with the book held between their lips.

Even if the action in the first two acts logically builds towards the final scene this is simply not good “Handwerk”. It is a "Schreibtisch" concept which hasn’t translated into interesting music theatre. When I first saw this production in 2008, I summoned all the goodwill I could manage in a conscious effort to take a stand against the conservative and reactionary elements attending the Bayreuth Festival. Having now seen the production live for the second time, I have to acknowledge that the flaws cannot be outweighed by the ingenious finale of Act 3.

Among the singers, Klaus Florian Vogt outshone all others with his crystal clear, but often short-of-breath, Walther. This was his final year as Walther in this production; he will sing Lohengrin next year. James Rutherford as the new Sachs made a competent Bayreuth debut, and Michaela Kaune (Eva), Norbert Ernst (Davis) and Markus Eiche (Fritz Kothner) again managed to imbue their parts with that much needed extra touch. Michaela Kaune, to her misfortune, was left to portray a character that the stage director seems to have no interest in at all. To my disappointment, the other singers were rather anonymous. The chorus, however, was first rate, as usual. The conductor, Sebastian Weigle, benefited from an orchestra in better shape than when I heard them live in 2008, but he still doesn’t manage to ignite the score with any life. The orchestra plays all very correctly, but the sound it produces is uninspired and grey, and yields very little of interest.

The Bayreuth audiences showed no mercy when Katharina Wagner came out before the curtain. She must have some nerves, enduring such negative reactions year after year. 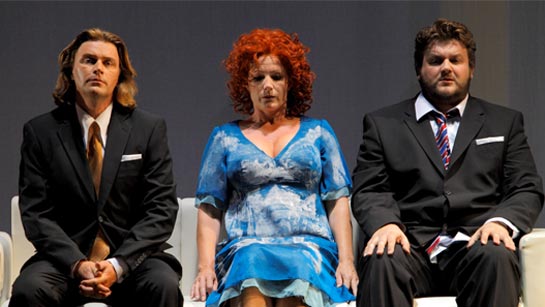