Siegfried 9 May 2009 at Washington National Opera 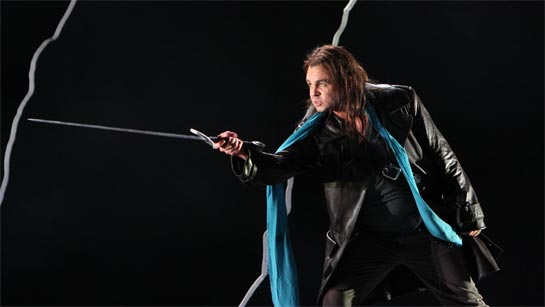 This review is based on the performance on 9 May.

Sometimes, all it takes is a hot Brünnhilde to propel Wagner’s Siegfried to a blazing, transcendent finale. On Saturday May 9, 2009, as Pär Lindskog intoned the first words of opera’s fine scene, “Selige Öde auf sonniger Höh’!”, there were fears the tenor’s vocal struggles—manifest during the first evening’s first two acts—would last through the end of evening.

But something extraordinary happened during this Washington National Opera performance, the third of five during the current run. As Wagner’s glorious music evokes the sleeping Brünnhilde’s, Pär Lindskog’s voice suddenly blossomed, his “Erwache! Erwache! Heiliges Weib!” ringing forth with a clarity and freedom previously unheard during the evening.

After the very attractive Brünnhilde, Iréne Theorin, was roused from her sleep by Siegfried’s kiss, the two Swedish artists sang a glorious, extended duet. When the final curtain fell, the Kennedy Center Opera House audience exploded with tumultuous applause and bravos.

Lindskog had been suffering from a bad case of bronchitis for the past month and at the May 2 premiere he mimed the role onstage while Scott MacAllister sang from the side of the stage. Theorin was reportedly not feeling her best at the premiere, either, even though once past “Heil, dir Sonne!”, she sang impressively.

The lingering effects of Lindskog’s bronchitis were apparent during the first two acts of the May 9 performance, which was also his Washington National Opera singing debut. The tenor was barely audible during much of the Forging Song and during the second act the Forest Murmurs passages were more roughly than lyrically sung.

During the final scene, however, Theorin and Lindskog inspired each other, Lindskog becoming vocally more secure as the two characters sing about the passion that is engulfing them. And Theorin’s resplendent performance may be her best vocal outing during her current U.S. engagements. Indeed, I haven’t heard such expressive, tonally secure singing by a Brünnhilde since Birgit Nilsson and Gwyneth Jones during the 1970s.

Theorin and Lindskog are reunited in the Washington National Opera’s production of Ariadne auf Naxos next fall, performances the company’s audiences surely will be anticipating.

Among the other singers in the current Siegfried, Gordon Hawkins continues to stand out as the malevolent Alberich, who mixes Molotov cocktails during the second act as he darkly prophesizes the downfall of the gods during his scene with The Wanderer.  Alan Held was a worthy foil in the latter role and cast as Mime, Andreas Conrad’s tenor singing was impressive throughout the first two acts.

Except for some wayward horn passages, the Washington National Opera Orchestra continues to perform Wagner’s score with éclat, led by conductor Michael Güttler, replacing the previously scheduled Heinz Fricke. (Fricke has been sidelined by surgery.)

Regardless of what one thinks of director Francesca Zambello’s overall concept of an American Ring, and I am among its doubters, the May 9 performance was further opportunity to study the production’s successes and shortcomings.

In the first act, Zambello makes economical use of the bathtub that is among the junk strewn about the yard where Mime’s decrepit, 1950s-vintage trailer is parked. Siegfried looks into the bathtub as he sings of seeing his reflection in a brook. Later Siegfried dunks Mime’s head into the basin and Wotan uses some of the water in the bathtub to refresh his armpits. Siegfried drops the sword into the tub during the forging scene.

And there is dramatic consistency in the mother-fixated Siegfried’s wearing the turquoise scarf that once belonged to his mother Sieglinde throughout much of the opera and then doffing the scarf once he is aroused by Brünnhilde.

The Woodbird gaily waves the scarf as she gaily leads Siegfried onstage during the last act. The character then drops the scarf and runs offstage without even glancing at the recumbent Wotan.

So when The Wanderer sings that the bird flew away because it spotted the lord of ravens (i.e., Wotan), one wonders why the Woodbird didn’t display alarm when she came onstage. As noted in the review of the May 2 performance, some dramatic fine-tuning is needed before this cycle is completed.

Siegfried will be repeated on May 14 and at a May 17 matinee. After the last performance, the Wagner Society of Washington, D.C. is hosting a cast party for some of the singers. “Food and mead will be served,” the Society advises. So after his Washington travails and triumphs, Lindskog may finally get the refreshment Siegfried sings about during the opera’s second act.