A Tale of Two Siegfrieds 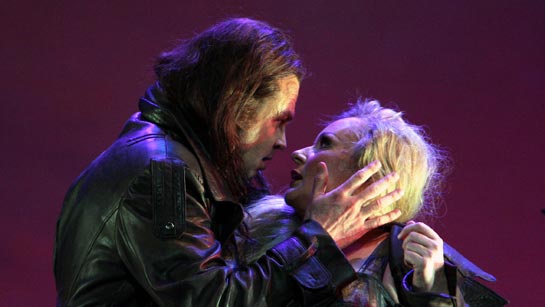 “We are going to have to present two Siegfrieds,” Washington National Opera general director Plácido Domingo told the Kennedy Center Opera House audience just before the company’s first performance of Siegfried on May 2, 2009.

We’ve had a lot of difficulties,” Domingo explained. The lead tenor, Pär Lindskog has a bad case of bronchitis and because the production is quite complicated, Lindskog is acting the role while another tenor, Scott MacAllister, is singing from the side of the stage, Domingo added.

And the difficulties Domingo referred aren’t limited to an ailing principal. At the April 27 technical rehearsal, the large mechanical dragon broke down, reportedly angering director Francesca Zambello and the final dress rehearsal on April 29 was not open to the public, as is usually happens during Washington Opera rehearsals.

Siegfried and Siegfried: MacAllister and Lindskog

MacAllister sang a strong, virile Siegfried from stage right as Lindskog mimed Zambello’s sociopathic youth. Siegfried dunked Mime’s head into a bucket of water a couple of times during the first act, which some have construed as waterboarding and in Act II, Siegfried doused the corpses of Mime and Fafner with gasoline, and threatened to use a cigarette lighter to set fire to them until the Forest Bird instructed him not to do so.

As he acted, Lindskog lip synched Siegfried’s lines, a bit distracting at times, given Lindskog's physical distance from MacAllister as Lindskog clambered about the stage. In a somewhat similar situation during the Seattle Opera’s first 2001 Ring cycle an injured Alan Woodrow also sang Siegfried’s lines from the side of the stage while Richard Berkeley-Steele mimed the role.

In Seattle, Berkeley-Steele both sang and acted the role during the last two cycles. On May 2, a Washington National Opera press spokesman said the company is in a "wait and see" mode about Lindskog, that the company and artist are monitoring his condition very closely and there is optimism that Lindskog will be able to sing the role at some point in the run. 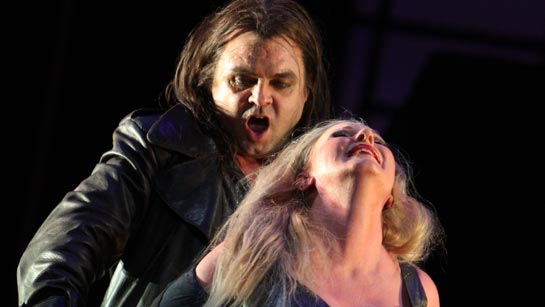 But as apparently happened in Seattle, Washington National Opera’s audience adjusted to the unusual vocal/acting arrangement and intermission chatter focused more on the production’s idiosyncrasies than on the dual Siegfrieds.

Washington’s Brünnhilde, soprano Iréne Theorin, was originally scheduled to make her American debut in this production. Instead, Theorin sang the Die Walküre and Siegfried Brünnhildes in April at the Metropolitan Opera, replacing Christine Brewer.

Whereas Theorin barely managed Siegfried Brünnhilde’s optional final high C during the April 18 Met broadcast performance, she nailed the character’s high notes in Washington. Even though she lacks the vocal power of her some of her Nordic forebears, Theorin is a very attractive, appealing Brünnhilde. 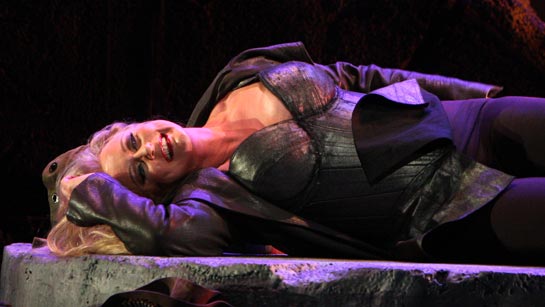 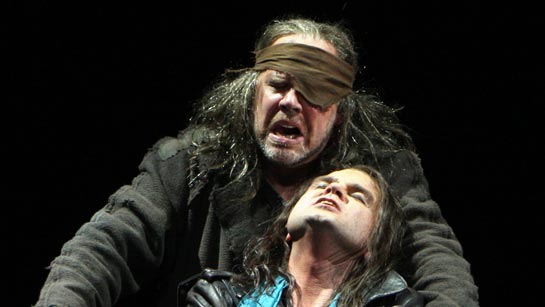 According to a company spokesman, bass Alan Held is singing his twentieth role with the Washington troupe. Certainly Held has developed into an even more admirable, reflective Wotan since first appearing locally in the role in the 2003 Walküre and in the company’s 2007 version.

In the more recent Walküre, Wotan is a business tycoon operating from a skyscraper penthouse office in New York. In Siegfried, however, the character has devolved into a homeless, unhygienic hobo, a Wanderer who splashes water onto his armpits in Act I and attempts to bathe in the dragon’s steam in Act II.

Except for a brief unsteady moment at the very end of Wotan’s confrontation with Siegfried in the last act, Held sang magnificently, his vocal prowess belying the seedy character he is required to depict. 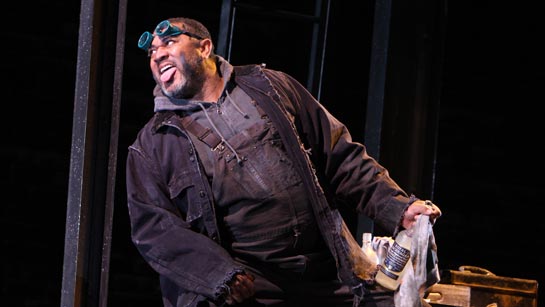 Gordon Hawkins’ raging, malevolent Alberich was the standout of the 2006 Das Rheingold that inaugurated the current cycle and Hawkins is also Siegfried’s most vocally and dramatically impressive character, his voice ringing forth with stygian Wagnerian splendor.

However, to fit Zambello’s concept of the deterioration and increasing moral squalor of American society, Alberich runs a small-scaled “chemical” business whose bottles fit easily into a shopping cart he wheels offstage in the second act.

There was something similar hereabouts when the Deutsche Oper brought Götz Friedrich’s Ring production to the Opera House in 1989. However, the Deutsche Oper dragon was both entertaining and menacing. Zambello’s mechanized beast, part of which is sliced by the sword-wielding Siegfried, is merely outsized and cumbersome, an unnecessary expense in these frugal operatic times.

Erda, sung by Nancy Maultsby, no longer sports the Native American garb worn by the Rheingold Erda. Now the character is clad in the sort of elegant, robed gown that Washington socialites display at some of this city’s more elegant parties and receptions. It’s not clear how this new costume fits into Zambello’s conception of a dysfunctional society. The other character, the lithe, fetching, and smartly attired Woodbird, was sung by Micaëla Oeste.

Billed as the “American Ring”, the Washington cycle is now three-quarters complete. Due to financial exigencies, the full cycle planned for later this year has been postponed (2013 is the rumored new date). The company will instead present two concert performances of Götterdämmerung in November with principals originally scheduled to appear in the full cycle. Meanwhile, the cycle’s completed productions are being shared with the San Francisco Opera.

The Washington postponement provides an opportunity for Zambello and her production team to rethink the production. Having Act I of Siegfried take place in a rubbish yard, Act II in an abandoned industrial building, and Brünnhilde’s Act III awakening in a ruined southwestern Indian pueblo does make some cogent points about decay and squalor that permeates parts of American society. And these conditions have grown worse in recent years because of unbridled financial excesses and resulting chaos. 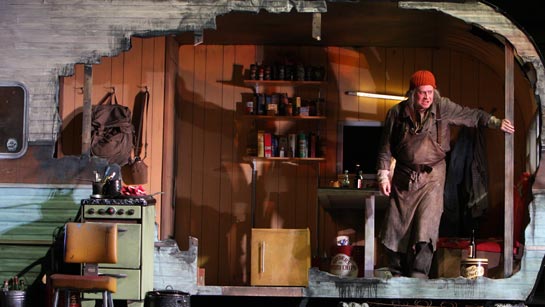 But Francesca Zambello’s narrow focus largely ignores Wagner’s mythos and titanic sweep, as well as the role nature plays in the Ring (a forest scene is projected onto the back of the stage at the very end of Act II of Siegfried and except for a few other distracting projections during the orchestral passages that open Acts II and III, we don’t experience the natural world that is supposed to permeate this opera).

The first three productions in the Washington National Opera’s Ring cycle have for the most part worked very well musically, the Siegfried especially so. But the cycle still needs a lot of tweaking to be an effective dramatic interpretation of Wagner’s epic vision.